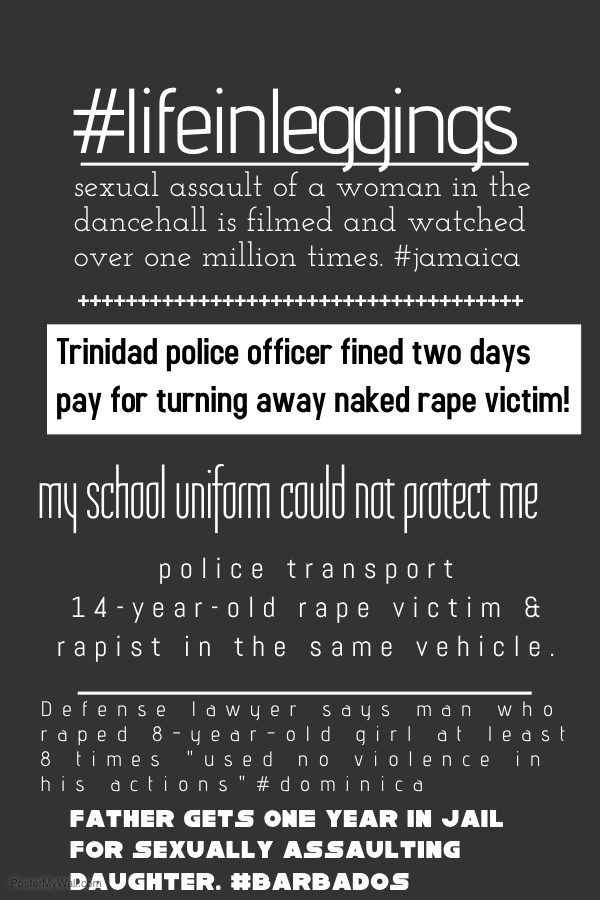 Check out these three online Caribbean media sources that have us excited about new ways of telling Caribbean stories!

Brilliant, fresh and socially engaged.  Antillean Media Group has been in town for a long time and remain as relevant, creative and cutting edge as ever.

Describing itself as a celebration of millennial Caribbean voices, this is definitely a space to watch!  So far we’re loving the outlets for creative writing and reflection.

With over 30 Caribbean feminist and social justice bloggers in its network there’s something at the CatchAFyah Caribbean Feminist Network website for everyone who’s passionate about the future of our region.

Leave us a comment and share any fresh Caribbean new media projects we need to know about!

Earlier this year an AlJazeera news story cited the World Bank’s report on gender and business which revealed that “husbands still hold the power to prevent their wives from working in at least 15 countries, and laws in 79 nations still restrict the kind of work women can do.”

In Jamaica, the 1942 act governing the employment of women states that no woman shall be employed in night work except in limited circumstances which include, inter alia, care of the sick, pharmacy and employment in the hospitality sector. At least since last year, discussions have began about amending the act to align with the reality that many woman already work at night, already work flexible hours, often in precarious employment.

Jamaican culture critic, Carolyn Cooper, pointed out that though the 1942 act is sexist, discriminatory, classist and patronizing toward women, the motivations for amending it have less to do with gender justice and more to do with making women’s labour hyper-exploitable.

During parliamentary debate on the Flexible Work Arrangements Bill Senator Marlene Malahoo Forte drew attention to the fact that considerations for women’s safety at work ought to be factored in, noting, “you know we also have high incidence of rape at nights; we have abduction of children and women.” One of her colleagues, Leader of Government Business in the Senate, Senator AJ Nicholson, interjected with, “What you want flexi-rape?” His comments were met with laughter from the majority-male parliament. When asked to withdraw his sexist, inappropriate rape joke, Senator Nicholson, invoked his patriarchal privilege to make a joke of whatever he felt like, “Man caah run a joke again?”

No, Senator.  Man can’t make rape jokes and expect them to go unchallenged.  Most of your colleagues may have laughed with you but not everyone is laughing.  Rape is no joke.  Neither is the exploitation of women’s labour in poorly paid, precarious and potentially dangerous employment.  While women don’t need patronizing laws that restrict the kinds of work they can do, they do need decent working conditions and wages that permit them to take care of their families.  They need governments that take rape and sexual assault seriously. Women (and men) in other Caribbean countries have taken to the streets to hold states accountable for their response to rape.

When elected and selected leaders debate these issues on behalf of women who are 51% of the citizenry they ought to do so in a manner that recognizes women’s humanity and citizenship. Women’s lives are not punch lines.

Check out the Top 10 (hetero)sexist moments in Caribbean politics to see other regional leaders behaving badly.

EDITED TO ADD: It has been reported that AJ Nicholson subsequently sent threatening emails to Malahoo Forte, warning that “the big pay back is coming!“

Chair of Jamaica’s National Family Planning Board recently repeated the laundry-list of sexist cliched messages which shame women’s reproductive and relationship choices: too many, too few, too old, too young, superwoman doing it alone, Ms. Manipulator tricking men into pregnancy and child support.  Yes, the same old warmed over sexism where women are blamed for the end of society as we know it. *Yawn*

Check out the video below.

Now read Mar the Mongoose’s brilliant breakdown on why this reproductive shaming is hypocrisy:

Growing up in Barbados, getting pregnant was the worst thing you could do. Not just as a teenager, but anytime before you had secured your place as a DoctorLawyerBankmanager. I’m serious. The Worst Thing. Teenage or ‘early’ pregnancy was blamed for all the ills of society, directly or indirectly. […]

None of this was lost on the generation of women now in our mid-thirties. In the Caribbean, for children of the working class, education – and I’m not talking just high school I’m talking first or advanced degree – is the handful of magic beans. You had better get it and stick with it until you can prove to people that your family is officially out of the working class. So for women, pregnancy is to be avoided at all costs even into your twenties. Of course, people get pregnant in their early twenties and are not made to wear a scarlet A, but it is hoped in general that you get your papers before you get your pickney. And then there’s the whole wedlock business. I noticed growing up that the least Christian of Caribbean people could utter the phrase ‘out of wedlock’ with the highest amount of reverence – for wedlock. The single mother business was nothing to be admired, so there’s another delay. No babies yet. Get your papers, get your husband.