My Tweets
//storify.com/redforgender/speakupuwi-addresses-vaw-on-campus/embed[View the story “#speakupUWI addresses #VAW on campus” on Storify] 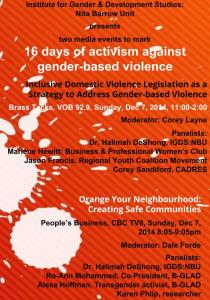 No worries! Check out the link for the highlights.

What stood out for me was the recognition that street harassment is often the gateway for other forms of violence against women & girls, that it has become normalised as a rite of passage for girls & that we can intervene in the very places where this takes place with street theatre which reflects all the issues discussed!

This is how it happens
This is how it happens
8:30pm
A woman is walking home alone
Nevermind what she’s wearing
There is no one else on the road
Some streetlights, but not the whole way
A car rolls up slowly behind her
Young man at the wheel begins the familiar hustle- “Goodnight. How you doing?”
Seemingly innocuous, right? Except that it isn’t
As usual, she ignores them
She is five houses away from her gate
Rebuffed, the car drives off
Then it pulls onto a neighbor’s bridge and turns around
Coming back, directly at her now
She is caught in the headlights
When they meet again, a hand snakes out the window and grabs her arm
Instinctively, she pulls away
“Touch me again, motherfucker!” she spits furiously
He looks at her semi-curiously
This seems not to be the reaction he expected
“Eh, is wha wrong wid you?”
“Fucking touch me again!” she challenges
Her keys are in her hand; his eyes an easy target
But there are more like him in the back seat and she is alone on the road
After a moment’s consideration, they drive away and she storms home

This is how it happens

Except sometimes they don’t loosen their grip and drive away

My friend N lives in the back of the Parfait Harmonie housing scheme. It is a long walk in to her house from where the bus drops her off. There are no taxis running short drop but even if there were, it’s not like she could afford to take taxis all the time. Predators can see the women coming from far off. They have plenty of time to hide behind the bushes, in ambush. N has been robbed and assaulted. She has written several letters begging the authorities to install streetlights. Months later, there are still no lights. She tries not to get caught on the road in the dark anymore. Her teenage daughter is similarly restricted. Another friend- A- lives in a long-established community that still doesn’t have electricity decades after its settlement. Every night, she has to go outside in the dark to bring her generator- her most valuable possession- back into her house. Those minutes are the most dangerous time of day for her. “Anything could happen; I know,” she says. “But I have no choice; I can’t leave it outside.”

Us vs Them
*They* don’t walk; *they* drive or are driven- SUVs and luxury vehicles with tinted windows and air conditioning. *They* live behind high walls and electrical fences, with armed guards at the gate. So *their* wives, daughters, and granddaughters don’t have to fend off the advances of sick fuckers who grab women on the street, robbing and raping them. *Their* wives, daughters, and granddaughters don’t have to struggle to fetch heavy generators up the steps while worrying about getting jumped in the dark. Which is not to say that *their* wives, daughters, and granddaughters don’t get raped, beaten, or victimized btw- that just doesn’t happen on the street. Because *they* are just like the others; they rob, rape, and beat just like the rest- worse actually because they are wrapped in the cloak of power and privilege. So no surprise then, that *their* people welcome admitted pedophiles and anal rape advocates with open arms, and pay them top dollar to perform for the masses.

walking the streets without fear

this is what i dream about

Tonight at 8pm Eastern Caribbean time/EST (that’s 7pm for those in Jamaica) join us on twitter for the #catchafyah tweet-up on #streetharassment in the Caribbean.

To participate just join the coversation using the hashtag #streetharassment and our #catchafyah hashtag for Caribbean feminist activism.